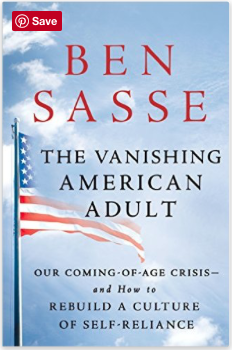 Copious amounts of American young adults are committed to an endless adolescence writes Ben Sasse, a Nebraska Senator. His new book, “The Vanishing American Adult:Our Coming-of-Age Crisis–and How to Rebuild a Culture of Self Reliance” relates how he and his wife are proactively helping their children become strong, independent adults.

Some of his key points are basic for my Grandma Adam’s generation. She had her mother live with her at the end of her life so her whole family was serving and interacting with her.  The first and fourth point weren’t even a consideration for the Great Depression. Nevertheless, this Wall Street Journal article was music to my ears. Sasse says:

In  a review of Sasse’s  book in the New York Times, the paper quoted the author,

“At our house we have come to conclude that building and strengthening character will require extreme measures and the intentional pursuit of gritty work experiences,” Sasse writes, and he presents his book as a guide for parents determined not to raise the kind of soft, entitled kids he encountered when he was president of Midland University. He says that the idea for “The Vanishing American Adult” first came to him several years ago, when a group of Midland students were asked to decorate a 20-foot Christmas tree on campus, and they dressed only “the bottom seven or eight feet … the branches the kids could easily reach.” Sasse was “startled” — “shattered,” even. Seeing this Christmas tree “worried me for the kids.” So began his growing awareness of “a collective coming-of-age crisis without parallel in our history.” He noticed that the affliction he observed at Midland could be found in the households of his closest friends and even his own home. His daughters once complained of being unable to sleep because the air-conditioning was broken. Sasse was aghast. “When I was a kid, we had air-conditioning in the house … but we never used it.” The fact that his daughters claimed a “need” for air-conditioning left him and his wife with “a heavy sense of failure.”

“Parents need to steer their children away from the dangers of “idleness and passive drift” — of, as he puts it, “affluenza.”

I read this article early in May in the Wall Street Journal  and knew I had to blog about it. As I googled the article this gem came up from February 2017:

This article from npr.org is another example of children who have been handed everything. To have Adults attend an Adulting School to learn how to be an adult would of had my Grandmother laughing, no, crowing and hooting! How could we, the babyboomer generation, do this? How sad to have  cocooned, coddled children, who don’t know how to fold sheets, or handle money or cook,  finally have to beg, borrow or steal someone to teach them how to handle basic, ordinary tasks that generations of parents before us taught their children? By not knowing how to do basic tasks, they begin to fear adulthood and think they can’t ever be good  at it. It’s a terrible case of  learned helplessness!

I recently couldn’t help hearing a conversation on a cell phone in a public bathroom on BYU Campus. A young woman was loudly lamenting to her audience on the phone that she was going to be “dumped into adulthood.” Her in-law’s lease on a car was ending so the mother-in-law wanted the car back they had let this young couple drive. Conversely, she “will have to have a car payment.” Then “her student loans were also going to be due when she graduated and when they graduated they will have to pay their own cell phone bills.” My heart went out to her that she was facing all of those new expenses. The trouble is you can never get ahead if you haven’t been taught or learned how to manage your money. If you haven’t been taught that you should never have a car payment then you buy into the fact that you have to go into debt to buy a car instead of a used car you  have saved for.  If you haven’t been taught that the goal is to graduate without student debt, then you will get student loans without thinking twice about them, and then live with that bad decision for years. If you have had someone pay your way in your life, like a “free” cell phone, then you start getting fearful that you can ever pay your way and that you will get “dumped into adulthood.”

I like how the last part of Ben Sasse’s book title says ” —and How to Rebuild a Culture of Self Reliance”. You can change the way you parent right now. If you are late in the game there will be drama. If you are early, you can really dig in and focus on it. It is also a  great reminder to me that when I  enable my children, I am not helping or blessing their lives.  I  still catch myself doing it all the time. It’s what I talked about in the posts on “Barriers to FamilyWork”. Help your children to be their most responsible selves.