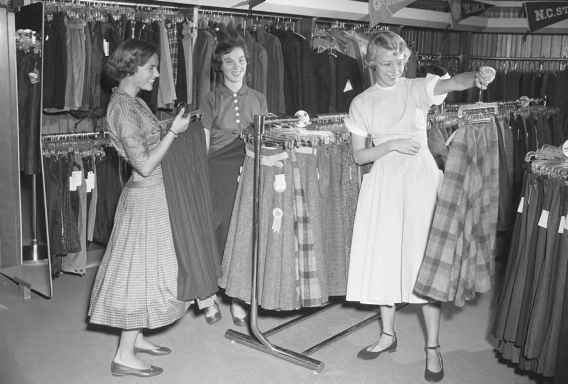 This post is a continuation of my last post on teaching your children to work for everything they want. (I LOVE the shoes on the right!)

First, you make sure they are well supplied with clothes as an almost 12-year-old. Second, through the first two years, I find clothes for them and tell them I got a great deal and charge them a small, affordable amount like three dollars for them. Remember a twelve-year-old can make a lot babysitting. The idea is that they are learning to work for what they want. If you start at fourteen, I feel like it’s too late. They already have an attitude of entitlement that’s hard to shake. You take it slowly encouraging them that they can do it. You are their cheerleader. You reinforce that they can do hard things and that it is worth it. There are some things I have learned to pay for…

I pay for underwear, socks and church clothes. I have found kids won’t invest in any of those clothing needs. At all! I pay half on their shoes so they’ll buy quality shoes. They love buying shoes because they all seem on sale. I also pay all sports expenses including clothing and shoes. I will buy them a first day of school outfit. I have also found that by the time they are 14 they want to choose their own clothes and I recede my influence so that they can reign supreme in this area of self-sufficiency. I remember one son finding 4 pairs of shorts at “Last Chance”, the Nordstrom outlet in Arizona for 10 dollars each, while we were on Spring Break. He knew that shorts like those usually cost 40-50 dollars each. He was thrilled at his find and I loved that at 15 he was learning the value of money and that hunting for a good deal pays off. What a difference this switch over makes! Every time he would wear one of his pairs of shorts, I would reinforce him saying, “Look at what you found, UNBELIEVABLE!” I am letting him know that I trust him enough to turn this responsibility over to him. What a difference from me going to the store with a budget in mind and maybe buying only one or two pair for him, because he wasn’t motivated to look for a deal and I wouldn’t have the time or come up with his right look. I have also taught my children to do their Back to School shopping in July. There are huge discounts as the stores clear their inventories for Back to School shopping. It also makes me so happy to have that chore over with when returning to school is so hectic.

We also pay for their grades in middle and high school. Fifty dollars a term in middle school, 100 dollars a term for straight As and A-‘s, or 10 dollars an A in high school. Initially it was all or nothing. My friend Nan Black said, “ Wow! Isn’t that a little harsh? They don’t get anything if they got all A’s and one B?” So we readjusted. See! I’m open to feedback. If they are enrolled in 7 classes if they have all A’s they get $100.00. If they don’t get straight A’s then we pay 10.00’s an “A”. If they get 6 A’s and 1 B, they are bummed when they miss out on the extra 40 dollars they would’ve earned in the class they got a B in had it been an A. It’s the last 10 percent of effort that would bring 40 percent more money. That reinforces a great principle on effort and getting good grades.

We pay 5.00 for each piece of music they can pass off every month so they don’t lose the hymns and recital pieces they’ve slaved over. The musical pieces have to be played without any mistakes. Absolutely, nooooo mistakes. It is such a great re-enforcer to keeping their music fresh and available. I asked my musical sister-in-law Jeannie, about how many hymns they need to know to be able to accompany in church meetings. She said ten would get them through most of the time. My lofty goal was initially 30 hymns. Then I faced reality and whittled that down to 10 hymns. Now if they know 5 I’m happy. Five is more than I know!

When they get these chunks of money they can bolster their clothes supply. They also get money for their birthdays. The great thing is they are motivated to get a low price when they go shopping. My kids don’t wear 100 dollar jeans. They don’t want to pay for that! They shop for sales and look hard for good deals. Better yet they are not putting pressure on me to buy them.

The best part is when they are responsible for their own clothes their perspective changes dramatically. When I shop with them, every once in a while I’ll buy them something they can’t afford and THEY ARE SO GRATEFUL! I’ll say, “ That is so cute on you! I know it’s not in your budget, but I love rewarding great kids that are working hard.” What a difference it makes to come out of a store and have them hugging you and being so excited instead of one where you had to put limits on their spending. They are putting their own limits! You have managed their expectations. I can’t tell you enough how rewarding it is.

Some people balk at the idea of paying your kids for grades, paying them for doing extra jobs around the house or paying them for passing off music. Most of the financial literature encourages parents to give their kids an allowance to help them manage their money. I struggle with giving away money with no effort given. I like them to “labor by the sweat of their brow,” like my husband and I do to earn, budget and save. James Jones says you provide money for your children either way. You can give it to them in the form of an allowance, or funnel it to them having them accomplish things or do extra jobs around the house to receive the money.

One of my friends told me that her children aren’t motivated by money. If everything is given to them why would they be motivated by anything? We are raising a whole generation to feel entitled without lifting a finger . Another friend said to me this week what her teenager said to her– “I hate you!” Then a few minutes later—“ Hey, Mom, would you take me to the mall?” What is happening to us as families with this teenage entitlement?

What is important here is you are establishing a pattern they can use for the rest of their lives. You are teaching them that this is how the real world works—this is one of the secrets of adult life –to work for everything you want. When you teach your children to work for everything they want, it is up to them to feed their own consumption monster, and they will become more grateful and aware of what things cost. It’s such a valuable lesson to learn in order to handle our appetites for all we are tempted to buy.

This is an update—I was looking on the LDS Church’s website on  self-reliance and this is the first video they show. I love that they talk about her 12-year-old daughter babysitting and how they were teaching her to be responsible for herself. Yay! Here is the clip:

Next post—the rest of the Age Bench Marks! The above post was only about buying clothes and paying for their entertainment. It’s a big step and mindset. It is such a powerful way for your children to start to learn how to be responsible and self-sufficient.