“Sistah C! I have been nursing my 18 month old and she wants to be fed every 45 minutes—even during the night! I am so tired I can’t function. What can I do?” I looked at one of my former young women who I have known since she was a darling 11-year-old. I recommended the book, “Bringing up Bebe” which I had just read and  was my first foray into French culture and how they bring up their children. The author, Pamela Druckerman,  outlined a specific nursing method which the whole culture espoused, to get their babies to sleep through the night. I saw my young friend a few weeks later and she said she was able to have her daughter get on more of a firm schedule and she was getting up only once in the night. She said one of her biggest problems was her daughter was eating all day, snacking here and there and constantly nursing. It is hard for a first-time mother to know what to do.

Actually, reading “Bring Up Bebe” is not my first foray into French culture.  We lived in the French half of Belgium in 1998 for a year and a half and I remember three things that initially stunned me.

There were no overweight people.

There were only a few fast food restaurants

I  also learned what leeks were and how to make leek soup. A clerk at a store showed me how to clean the dirt off of mushrooms instead of soaking them in water. The lunches at the Belgium school were amazing and made me wish I could eat there every day. I had seen with my own eyes how elegant and chic the French Belgiums were and how once you had a table for dinner at a restaurant you had it for the night. My education of learning how to savor and appreciate food had started.

Last year, after I read “Bringing up Bebe,” I ordered “French Kids Eat Everything,” another American’s experience  being married to a Frenchman and living in France with small children. Karen Le Billon, the author says, “This book is a very personal story about our family. But it also addresses assumes that affect all of our children. Because of poor eating habits, the current generation of North American children will suffer far more health problems—and perhaps have a shorter life expectancy —than their parents. We may be training our kids to eat themselves into an early grave.” 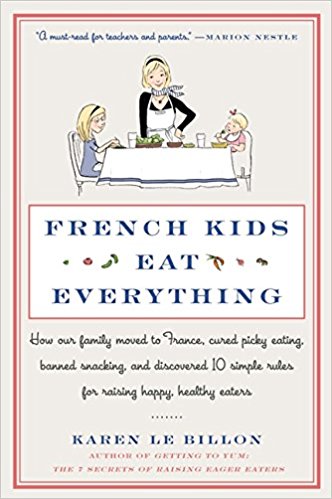 Here are her ten simple rules:

1. Parents: You are in charge of your children’s food education.

2.  Food is not a pacifier, a distraction, a toy, a bribe, a reward, or a substitute for discipline.

3. Parents schedule meals and menus. Kids eat what adults eat: no substitutes and no short-order cooking.

4. Food is social. Eat family meals together at the table with no distractions.

5.Eat vegetables af all colors of the rainbow. Don’t eat the same main dish more than once a week.

6a. For Picky eaters: you don’t have to like it, but you do have to taste it.

6b. For fussy eaters: you don’t have to like it, but you do have to eat it.

7. Limit snacks, ideally one per day (two maximum and not within one hour of meals.)

8. Take your time, for both cooking and eating. Slow food is happy food.

9. Eat mostly real, homemade food, and save treats for special occasions. ( Hint: Anything processed is not real food.)

10. Eating is joyful, not stressful. Treat the food rules as habits or routines rather than strict regulations; it’s fine to relax them once in a while.

This doesn’t happen without a lot of mindfulness and hard work. This book takes you through how Karen Le Barron thought children should eat what they want, when they want. She was in for a shock and a lot of stares and a whole mindset change because she was living in a place that made food–its presentation, its wonderfulness, and its importance to our health—the center of its culture.

Here are some more peeks at the book:

Page 97:  Karen starts trying to change her family’s  snacking pattern where she  broke rules #2 and 10#. It was a huge struggle to break them from the American habit of snacking.

Page 144: “Another thing Celine said intrigued me. “Americans have no self-control! “she kept repeating. This again reflects French views: people should show self-restraint when it comes to eating. This means treats are rare, should only be eaten occasionally, and it should be savored. Moreover, it means food should only be eaten at mealtimes, and only at the table. In breaking all French food rules, Americans were guilty of demonstrating lack of self-control. For all of these reasons, the American approach to snacking seems both slightly bizarre and vaguely repellent to the French—particularly the constant sucking and slurping of drinks…”

page 145: Karen Le Billon pointed out her 7th rule (see above) to her husband, Philippe,  and he said, “It’s good but not good enough. We have to change their minds about feeling like they need to snack all the time. It’s not that we are preventing them from snacking impulsively. They have to learn new habits so that they don’t want to snack. ”

In between meals, it’s okay to feel hungry. At meals, eat until you’re satisfied rather than full.

“Philippe’s comment reminded me of my mother-in-law’s sayings: “The stomach is a muscle. And just like any other muscle it should be allowed to rest. It shouldn’t be asked constantly to work.”

One of our jobs is to say no to whatever our culture touts as easy and the norm.  Even if you prefer slapping a frozen pizza on the table as you are rushing out to another soccer practice, it will make you think twice—”Is this really the way I want to live?” It seems food is the center of French culture and family life and I feel wistful about what we are missing out on as Americans as we snack and slurp our way to the fridge and back.  Even if you incorporated just a few of the tips above you could help your family eat better. I am guilty of breaking many of the above rules in raising my children. In fact I apologized to my oldest daughter the other day that she was taught, like I was, to clean your plate. But we can always learn and get better! Both of these books read like novels and have influenced me greatly—mostly to not snack so much and to slow down my eating and cooking.

One reviewer on Amazon said:

“By instituting some of the rules outlined in this book, we’ve changed our household dramatically. We stopped the fighting. We cooked good meals and started eating together, more slowly, enjoying conversation. We eliminated snacks from our house. We encouraged her to try everything, but didn’t force her to eat it (a “taste” was acceptable, it would reappear on her plate some other night). One snack a day, between lunch and dinner, and only fruit/yogurt/cheese/applesauce/etc. Desserts were for special meals and occasions (where it had previously been a reward for choking down a sliver of carrot). If she didn’t eat, fine, the plate was taken away when the meal was over and she could wait until her next meal. No snacks! (Very quickly, she finally stormed into the kitchen, took back her plate and happily ate everything she had 20 minutes ago declared “yucky!”) We started formal dinners once a week to have fun dressing up the table. She was encouraged to help with the cooking more. Eating is supposed to be FUN and enjoyable!’

“Finally, we changed ourselves. We took the time in the morning to make meals and eat together, as well as the evening dinner. We stopped letting ourselves get frustrated, because we knew that we weren’t starving her (plenty of yummy food was being served), and eventually she would eat when she got hungry and realized that no, a cookie or box of crackers would never be coming.’

“I recommend this book to every parent.’