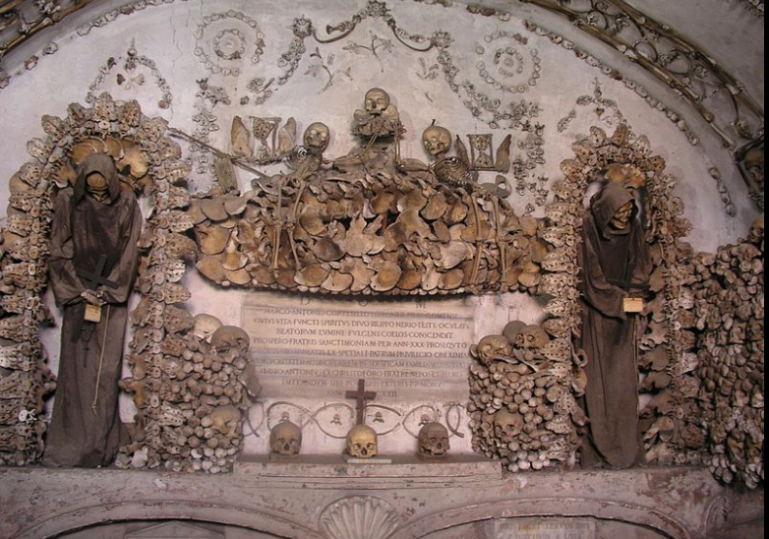 We are in Rome, Italy.  My husband and I flew  last Monday, March 19th to arrive on Tuesday March 20th.  We have been planning this trip since last fall, as a surprise Christmas present for our children.  Craig and I , are here from March 20 to April 20th, partly because my husband has wanted to move every two years, and these adventures abroad have helped keep that in check. We moved 13 times in our first 7 years of marriage until I figured that one out.  We are doing a little work and a little play here. He can work from here with a wi-fi connection.

We are frugal travelers. We found an Airbnb by the Vatican and got 40% off the rate by staying for a whole month. We flew Norwegian Airlines, which we first discovered when we flew last October to pick up my daughter from her mission in Sweden. I pictured “Allegiant Airlines does Europe” because it is touted as “A Low-Cost Carrier” but it has been better than that. Some of the  things I have noticed different from say, a Delta Airlines flight, is no blanket or pillow is offered and you have to pay for your meals. The meals are so disappointing that we have felt better paying for an airport sandwich to bring on than $40.00  for 2 meals. It also has felt more upscale with drinks and movies for free. We misunderstood on the luggage—we paid for two checked bags–30.00 each way times two of us– but found out on the plane that a wheeled bag is allowed in the overhead bins for free and Craig brought two backpacks as well and wasn’t hassled about them. My only complaint this time was how freezing the cabin was. Luckily I had a down jacket that has its own little sleeve to pack it in and I whipped that baby out and was fine.

We were hit with a city tax of 3.5 Euros each for the first 10 days by the person checking us in to the Airbnb. We were surprised by that and handed over 70 Euros in cash. That is a new  tax.

As we were settling in I  heard a loud horn sound and called to Craig in the other room, “Was that you?” I walked in and Craig was leaning out the window, in a Rome kind of way, as a spectator. He was  looking at a group of  Swiss Horn players (see the flag) playing these monstrous horns. What the random? They played for ten minutes and then packed up and left. It was all very fascinating and I felt very welcomed to Rome and now could see the validity of the city tax of 3.5 Euros apiece for ten days! So nice of the city of Rome to welcome us so! 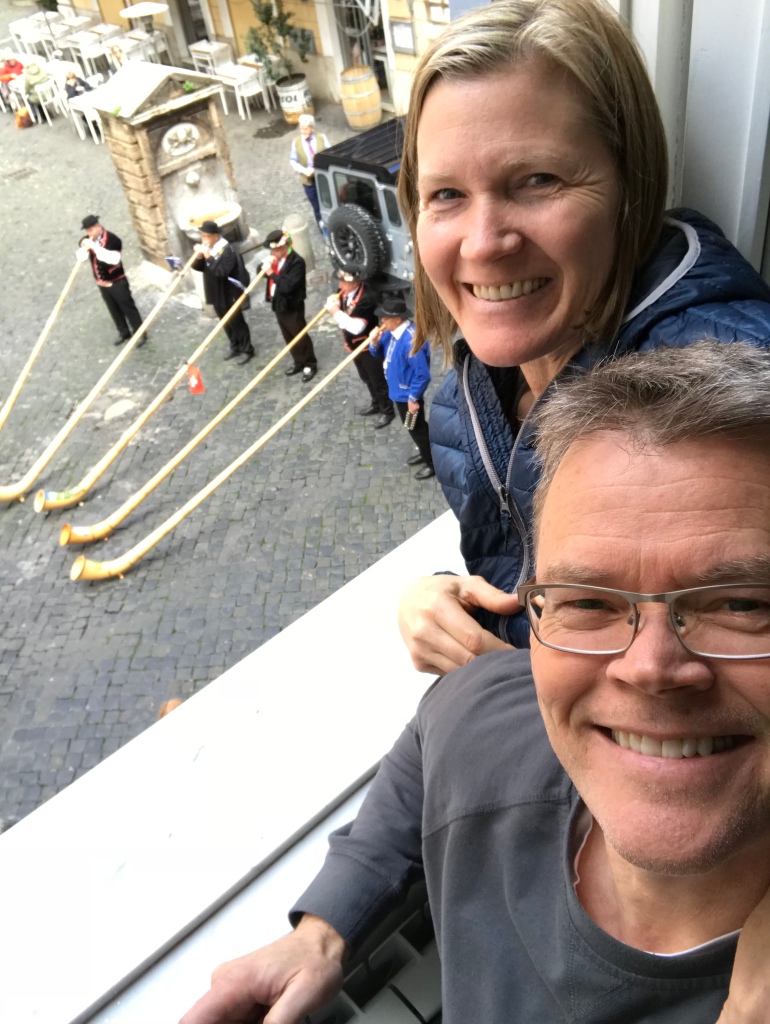 The first day we found a place to eat on the street but it was just ok.  I hate paying too much at a tourist trap. I am all about finding Trip Advisor’s cheap eats which always delivers better taste for a better price. I checked the web site  and we found “Alice’s Pizza” yesterday. We got 2 large squares each of the best tasting pizza for 6.5 Euros all together. That means for both of us! (1  Euro is about 1.25 US dollar) They weigh the pizza by the kilo!  I love eating my food by the kilo! So delicious and so worth the hunt. Trip Advisor, Airbnb and the Lonely Planet website are among the few sites that have  helped travel become affordable and accessible for us.

We came two years ago to Rome for the first time ever and saw the big stuff, like the Colosseum and the Sistine Chapel in the Vatican Museum and we know we will see those again with our children when they come in a week. Why did we come again so soon? It is such a magical city. Last time we walked and walked every night through these amazing neighborhoods of classical architecture and historic buildings alive with many people all full of life. All that magic made us excited to come again.

We are doing  the 2nd tier, inexpensive stuff in the mean time until our  children get here. Yesterday we hunted down the Capuchin Crypts and went through a museum with the audio guide. There was a tour for 33 Euros each for an English-speaking tour through the museum and then a concert in the church above the crypt.  We opted for the 5 E audio guide  plus the 8.5 Euro entrance fee each and we were glad we  spent more time in the museum as three  of the tours buzzed by us spending only minutes in the museum. You can hear a little bit of the concert below in the link and it sounds amazing. The crypt part was creepy. I mean look at the pictures! Music played while we were in the little rooms and it was a little much to see all these bones displayed. Wikipedia says:

“The Capuchin Crypt is a small space comprising several tiny chapels located beneath the church of Santa Maria della Concezione dei Cappuccini on the Via Veneto near Piazza Barberini in Rome, Italy. It contains the skeletal remains of 3,700 bodies believed to be Capuchin friars buried by their order. The Catholic order insists that the display is not meant to be macabre, but a silent reminder of the swift passage of life on Earth and our own mortality.‘

“When the monks arrived at the church in 1631, moving from the old monastery, they brought 300 cartloads of deceased friars. Fr. Michael of Bergamo oversaw the arrangement of the bones in the burial crypt. The soil in the crypt was brought from Jerusalem, by order of Pope Urban VIII.’

“As monks died during the lifetime of the crypt, the longest-buried monk was exhumed to make room for the newly deceased who was buried without a coffin,[7] and the newly reclaimed bones were added to the decorative motifs. Bodies typically spent 30 years decomposing in the soil, before being exhumed.” 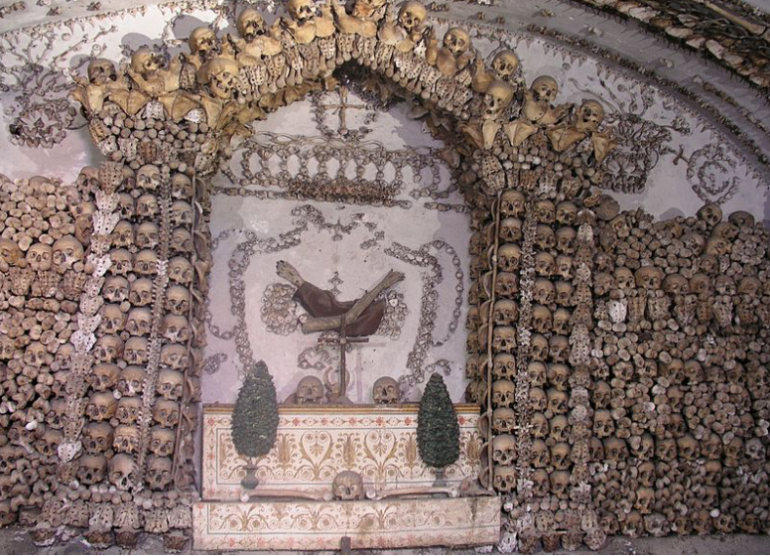 This is the link where you can hear part of the concert in the church above the crypts. https://www.classictic.com/en/capuchins_crypt__sacred_music_in_the_heart_of_rome/31989/365164/

After several inquiries and different directions given, we found this grocery store in our neighborhood tucked into a beautiful building without much signage. That kind of subtle display was hard for us over-marketed Americans to see at first…like, “Oh! There it is! That must be it! 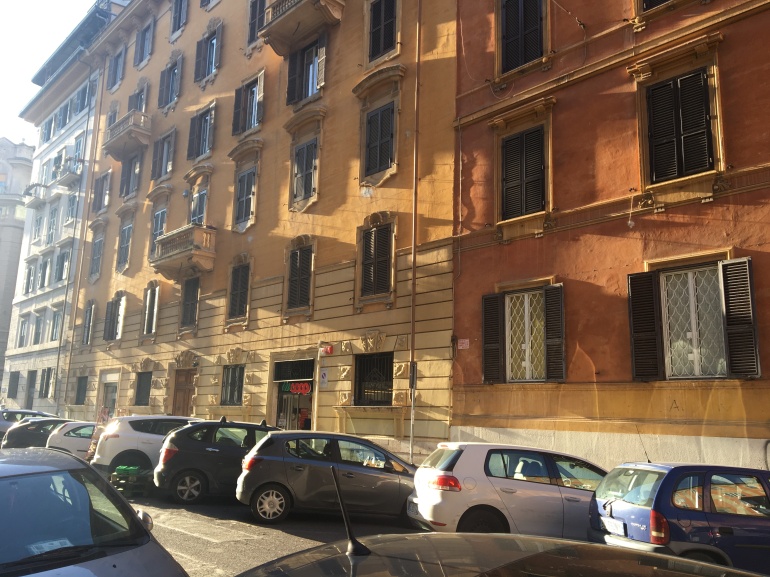 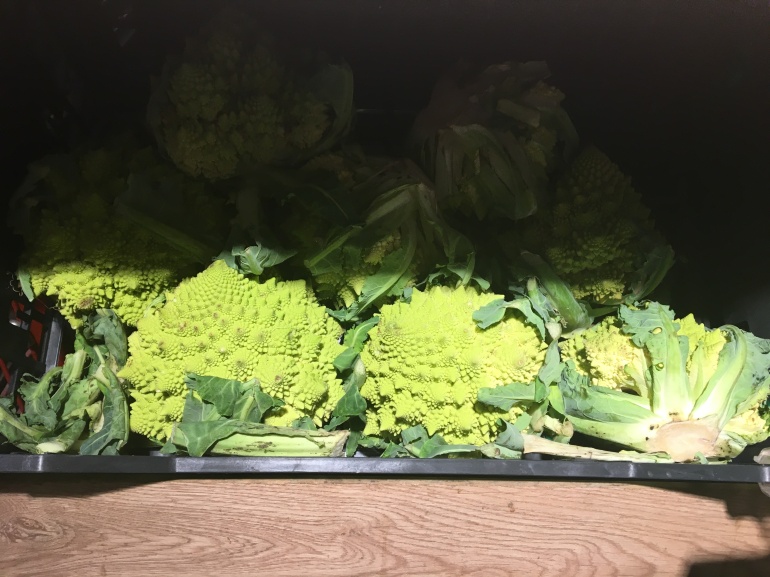 I spied with my little eye this broccoli Romanesco, which I had ordered seeds of and just planted in my very own grow boxes before I left Utah.  Isn’t it glorious? This is what seedsavers.com said about it:

Produces a stunning apple-green whorled head with better taste and texture than most of the finest broccolis. Widely grown and prized in Italy. Grows exceptionally well in cool northern areas. 75-100 days from transplant. ±8,100 seeds/oz.

I was SO EXCITED TO SEE THAT BROCCOLI ROMANESCO! Craig wasn’t as impressed…he said it looked like alien broccoli… 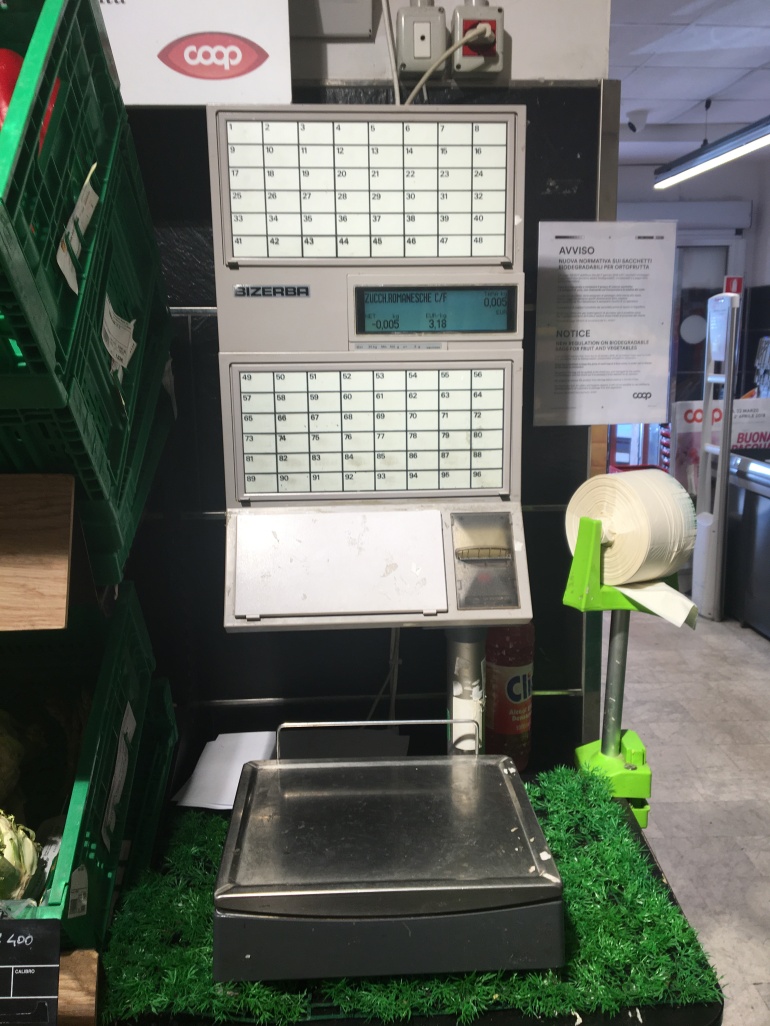 I tried to buy bananas and the cashier waved me back to this machine. I didn’t understand how to work it and she said “17” in Italian which people in the line translated to English, so I ran back while every one was waiting behind me and weighed the bananas again, this time pushing number 17. A little adhesive slip came out with the weight in kilos and the price.  I noticed that if I were buying the broccoli it said #18 on the sign by it and I would push that button.

We got milk, bread and cereal, among other things, and at the checkout she rang up the shampoo, and I picked up creme rinse and said to the cashier, ” After shampoo?” Several people started chiming in and talking rapidly in Italian. I asked again to the group of 8-10 people, “After?” then they all said together in English, in unison, “After” nodding their heads. I felt like I was in a Jerry Seinfeld skit where the crowd gets swept up in the dialogue and the action! It was very validating to know I wasn’t putting lotion or sunscreen on my hair after I shampooed it! AND I just now downloaded the app, Google Translate, so in the future I can consult my phone–but then I don’t get to have the Jerry Seinfeld experience and connection everywhere I go! It was all magnificient–do you have any suggestions on what to see?