I have been so excited to write about this book. I finished it in January and have been referencing it ever since to anyone who would listen.

” In the year 170, at night in his tent on the front lines of the war in Germania, Marcus Aurelius, the emperor of the Roman Empire, sat down to write…for himself. (He is) known today as the last of the Five Good Emperors…and what he wrote is undoubtedly one of the history’s most effective formulas for overcoming every negative situation we may encounter in life. A formula for thriving not just in spite of whatever happens but because of it. Marcus Aurelius wrote:

“Our actions may be impeded…but there can be no impeding our intentions or dispositions. Because we can accommodate and adapt. The mind adapts and converts to its own purposes the obstacle to our acting. The impediment to action advances the action. What stands in the way becomes the way.”

Ryan Holiday continues, ” In Marcus’s words is the secret to an art known as turning obstacles upside down. To act with a “reverse clause“, so there is always a way out or another route to get where you need to go. So that setbacks or problems are always expected and never permanent. Making certain that what impedes us can empower us.”

This book is dazzling.

A friend told me that her son, newly divorced after 3 years of marriage, recommended it to her. I thought if anyone knows about obstacles it would be a divorced kid going to BYU.

Essentially, this young man, decided to be truthful about his divorce.  His bishop sensitively  asked him if he wanted it to be public knowledge or private. He said public. He gave a talk in church when asked and at the end told about how hard it is to be divorced. He was forthright and truthful. He has accepted that being a young, divorced single is part of his narrative. He refuses to feel shame or regret and has realized that it is part of who he is now and it will become a blessing for him as he goes forward. After I read this book,  I am sure it’s one of the reasons he is in a better space.

This ties into my favorite scripture of all time… D&C 98:1-3

1 Verily I say unto you my friends, fear not, let your hearts be comforted; yea, rejoice evermore, and in everything give thanks;

2 Waiting patiently on the Lord, for your prayers have entered into the ears of the Lord of Sabaoth, and are recorded with this seal and testament—the Lord hath sworn and decreed that they shall be granted.

3 Therefore, he giveth this promise unto you, with an immutable covenant that they shall be fulfilled; and all things wherewith you have been afflicted shall work together for your good, and to my name’s glory, saith the Lord.

These verses make a promise, yea “an immutable covenant”(!) from the Lord that ALL THINGS  that we have been afflicted with shall work together for our good and God’s glory. Can you see why it is my favorite scripture?

I looked up synonyms for “immutable” and they are “unchanging, permanent, abiding, constant, perpetual, stable,  and enduring”.  I went back and read the verse again and substituted immutable with each one of these synonyms. Such a powerful exercise. I read this scripture EVERY TIME I go to the temple to remind me of the promise God has made to me. You add God’s promises and Christ’s Atonement to the challenges we face, and when our mindset changes to understand that truly that “what stands in our way becomes the way” we have been given some pretty powerful tools to navigate this life.

What I have come to understand, as Ryan Holiday gives example after example, is that those that he writes about, that have had impediments, weaknesses and terrible things happen to them, didn’t let that define them.  Those that stand tall, accept whatever catastrophe has befallen them, and learn from it, use obstacles as a way to learn and improve. The “reverse clause” that Ryan Holiday references really works. He writes a wonderful chapter about Katherine Graham which the movie, The Post is about. This book was published in 2014 so he captured her essence before the movie did.  He fleshed out more than the movie showed and by the end of the chapter shows how Katherine Graham, having never worked outside of the home, becomes not one of the best  women CEO’s ever, but one of the best CEO’s, EVER. Her husband’s suicide, the Pentagon papers, her lack of confidence in speaking, she just kept working though hard thing after hard thing.

Above is a link to an interview  with Katherine Graham in 1997, 4 years before she died .  She talks about what the movie, The Post is about, printing the Pentagon Papers and how hard it was being the decision maker.

When I finished the book I could see “The Obstacle Is The Way” examples everywhere, and when I realized it, I would say it out loud, like, “Yes! Here is another one! I am going to learn from this so next time it won’t be as painful or such a big deal!” You totally have to have a Growth Mindset in order to overcome difficulties in you life and that is what the book helped me see, the less I resist and the more I embrace what is causing me pain,  examine and think outside the box, the more peace I will have in my life.

“We’re always trying to make problems or “obstacles” go away. But what if we just let them BE the way? What if we trained ourselves to immediately accept and love what it is as we rub our hands together at the opportunity to create a better plan using this new variable as a catalyst and going from there?”

A couple of weeks ago I was discouraged about a camping trip I was putting together. We had hit a snag and it discouraged me. I said to my seventeen-year-old, “Should I just cancel the trip? Things aren’t coming together.”

Cam said, “No Mom! The Obstacle is the Way! This is just a little bump. You will work through this and things will smooth out. Don’t give up!”

I actually swiveled my head around to look at him directly. Like, Role reversal! But his words went deep. Boy, did I need that encouragement right then at that time. I realized I had talked about the book so much that Cam had gathered the main point and then used it to encourage me.

The best thing in this book are the stories. A Fierce Mormon Mother would have a lot of material to tell her children stories of people overcoming obstacles.

To repeat the Marcus Aurelius quote:

“The impediment to action advances the action. What stands in the way becomes the way.”

We happened on a picture of a plaza that Michelangelo designed, from the Lonely Planet website. It was featured under “40 Free Things to do in Rome” and when I read who had designed it and who the statue was,  we made the trek yesterday.  Michelangelo  featured in the very center, a statue of our favorite Emperor, Marcus Aurelius. 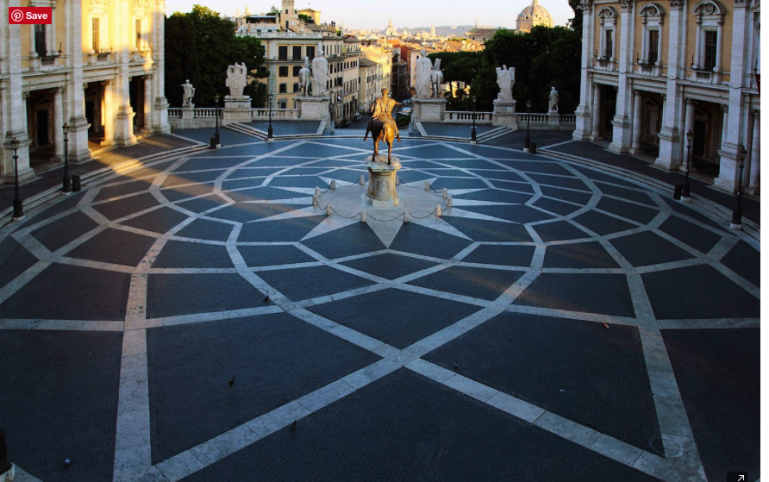 I love the light shining on the statue. Here is our picture:

What are some of the obstacles in your life that have become blessings?