It is Easter week in Rome, as it is everywhere.  Last Sunday was Palm Sunday and the polizia blocked off the street so we had to walk around the line that was wound around the Vatican.

People were carrying palm leaves, but also a smaller leaf—kind of a sage leaf. I looked it up and of course its olive branches from olive trees! I wish I would have realized that while I was walking to church, I think it would have meant more to me. Everyone was carrying them as we walked to the Metro to attend the Rome 1st Ward. 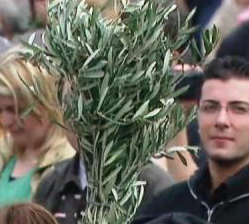 I love this Easter video that the church made a few years ago. It is so fresh to me every time I watch it. I never get tired of it.

and under the video, the church has posted:

“In the span of one week, Jesus rewrote humanity’s story. This Holy Week, He can help you start to rewrite your own. This Easter, we invite you to follow the example and teachings of the Savior by loving others, loving God, and making changes that will lead to lasting joy and peace in your life.’

“What will you change #BECAUSEofHIM?”

My friend recommended the book, “More Than The Tattooed Mormon“, by Al Carraway. Lisa got it as a present at Christmas. She told me, that one of the biggest stories in the book was when Al finally drove into  Utah from New York—all across the country by herself. She saw a place that looked like good Mexican food and stopped at Cafe Rio. She said she was in the wind-y line that is all things Cafe Rio and she happened to be  holding a book about one of the prophets, she said, because it’s hard to eat alone and she was trying to learn as much as she could about this new church to bolster  herself. Anyway, you get to look over people in line pretty well on your way to ordering food at Cafe Rio. One of the people in the line actually said to her, “What is a person like you doing holding a book like that?” She said it was such a fork in the road. She could have gotten her feelings hurt and left the line and driven back to New York, just because she had already had so much opposition in getting there and she was feeling worn out from the whole trip, the decision she had made and what it had cost her. She said she paused, and thought, and then said something like, ” I just got baptized. I am learning all I can about this church!” and then the crowd warmed up to her.  Honestly,  the book  hadn’t ignited any interest in me because I thought it would be “gospel- lite”. I was really wrong. The biggest quote that had the most impact on me was a story she told about being asked to speak at a small girl’s camp around the fire. The bishop of that ward was there that night and he asked the girls what the most important doctrine of the Mormon church was. Answers started flying in, “Prayer?”, “the Sacrament?”, “Reading your Scriptures?” He said those are all very important, but the most important doctrine of the Church of Jesus Christ of Latter-day Saints, to him was,

that we can change.

This book  is a great story for change, and especially wonderful to read aloud to your children—to help them learn  not to judge “a book by its cover” and to see how people make the decision to join our church, even if it is terrifying, which it was for Al Carraway.

I love how people are celebrating it here, in Rome, making it a week-long event. Palm Sunday starts the week out like I said above. On Wednesday we were hoping to go into St. Peters’ Basilica but it was roped off in the morning with a message from the Pope 4 hours later so we left. Holy Thursday had a morning mass and also in the evening, the Mass of the Lord’s supper. This mass focused on the bathing of the apostles’ feet by Jesus. Then there is Good Friday, which was yesterday,  where another mass was celebrated at St. Peter’s. Then, later in the evening there was a torch-lit procession that was led by the Pope to go through the Stations of the Cross. It runs from the Colosseum to Palatine Hill. At every Station, prayers were led. Then on Easter Sunday, there are two services, one is an Easter Sunday Mass, and then at noon, “To the City and the World” message and blessing is broadcast. Us Mormons will be listening to our General Conference, as well, which I love to do on Easter.

I love Easter and it’s message of the Savior, change, redemption and holiness. What are you going to work on, to change, to help yourself to be more like Him?