I sat across from my daughter last week on our weekly zip date, simultaneously wallowing in  and soaking up  our time together. She said to me at one point, “I have this thing inside of me, that I don’t know what to call it or how to explain it, but I can make myself do things I don’t want to do. Even when I am too tired, or don’t feel well, I can do it.”

I wanted to shout for joy, do a cart-wheel, shout “Hallelujah!” in the crowded restaurant!  Grit  is part of my  “Extremely Important Palette of Valuable Skills to Lift your Life “, that Craig and I are trying to pass on to our children.

I tried not to show it or overreact—lest I scare her— but I was ecstatic, exultant and supremely overjoyed to hear her say that.

I calmly said, “What you are experiencing, is called Grit. Tenacity. Self discipline. It is one of the secrets to a successful life! It will also help you get through a lot of hard stuff without collapsing. It is an emotional structure  you build inside yourself  by doing Hard Things.”

I recently came upon an old Christmas  picture when we were young marrieds with a couple of kids. I took a picture of it and sent it to my daughter-in-law, because my granddaughter is my son’s age in the picture. It was fun to see the strong similarities between them. After I sent the picture to her I looked at the picture closely. I was trying to remember the year it was taken. I calculated how old the kids were and realized it was in December of 1990. I kept thinking about it and realized  this picture was taken smack dab  in the middle of one of the worst periods of our married life. You would never know that from looking at the picture, but trust me, I was there. 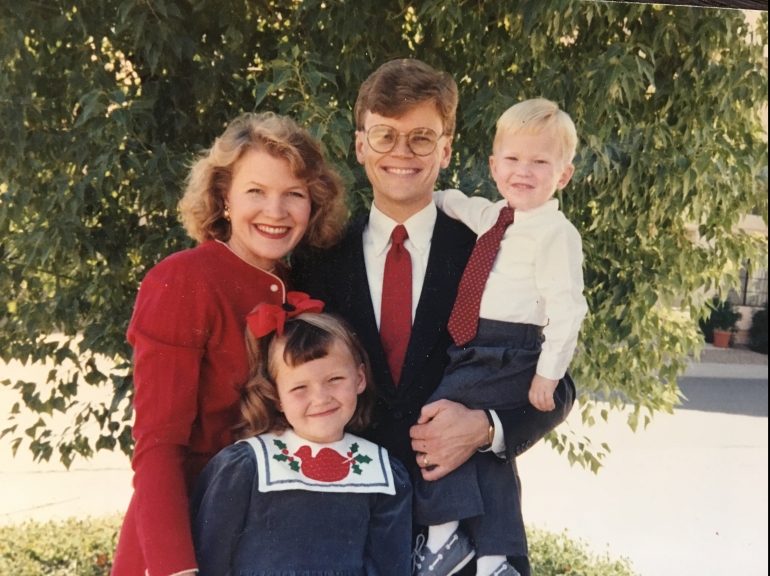 Six months earlier, in the  spring of 1990, I suffered a miscarriage at 16 weeks, which meant I had to deliver the little boy, we named Cameron Roy.  He was tiny and so beautiful! It was an extremely emotional season and it took us a long time to get over it. I had just started getting over intense morning sickness when I had the miscarriage.  We figured out that my attending nurse, after some chatting, was my neighbor across the street, whom I had never met. Because I was  such a private person, this horrified me at the time. It actually started a friendship that lasted many years, but at the time I was uncomfortable that she was changing my pads and seeing my pain.

That summer, as I  got better, Craig had a severe headache that took him to the doctor. It turned out to be  viral meningitis and he got very sick. He was laid up for many weeks. My in-laws came to help and I remember scrubbing bathrooms to get ready for them to come, on my 30th birthday. That was a tipping point for me that day, and I remember feeling so discouaged and how hard it all was.  After Craig got better, people in our ward came up to me and told me all the people they knew that didn’t make it through meningitis.

Craig felt better but weak by the end of the summer and that fall I got pregnant. In this Christmas picture I would be in the throes of morning sickness again, but I was so thrilled to be pregnant that any sacrifice was worth it.

This year was also financially challenging for us as our student loans became due. Besides working full-time, Craig took on a paper route that brought in an extra 600.00 a month. We also push started a car that Craig drove into downtown Phoenix everyday. He had found an incline at the parking lot at work so he could start the car to get home. I had started shopping at thrift stores for our children’s clothes. I put the little partridge on Nikki’s dress to make it look more Christmas-y.

Two months after this picture was taken Craig came home from work—he worked in commercial real estate—and said, ” I have to find a new job, they aren’t paying me my commissions.” The commercial real estate market was in free fall in the early 90’s in Phoenix. I didn’t appreciate Craig being proactive and looking for a job before things fell apart at work, because  I didn’t want to move where he was looking, which was in Utah. My family had always lived outside of the epicenter of the Church. We were “mission field Mormons”, which meant we were of sterner stuff than the softies that lived around each other.   Becoming a Utah Mormon, wasn’t in my life plan. It was an extremely  emotional time for me—see above pregnancy. I  would tell people that the claw marks from my hands were still  in the asphalt from Phoenix to Provo, from me moving to Utah.

Craig had a friend whose father had written a book and they felt like it was going to be big. Craig arranged an interview and was hired at Covey  Leadership Center. We moved in March and started our life in Utah in a tiny rental in Orem. We were down to one car, and I remember we would all pile in and  drive Craig to and from the airport whenever he had to travel somewhere to teach, so I wouldn’t be without a car.

Twenty-seven years later (last year) we “coincidently” ran into  the old friends that Craig worked with in that office in Phoenix. As talked about the past with them, we realized we moved in March while Craig was still getting paid. They said by June, the office had shut down, and everyone was unemployed. It was amazing to see what we were spared, but at the time it didn’t feel like a blessing. We had experienced supreme financial stress, death, sickness with both of us and moving. It was a hard, hard year from spring 1990 to spring 1991. I guess when I look at that picture, what I see isn’t the perfect family, I see a picture of Grit because I know the back story. Honestly, we were strengthened so much during that time, and we had each other and just kept working at digging ourselves out the  emotional, financial and physical pit we found ourself in. We had the spiritual part of our life working meaning we had the faith that things would get better.  And things did get better.

Thank goodness for our faith, it  pulled us though when the other areas of our life weren’t functioning  as well as they normally did.

That is one of my favorite themes of the Book of Mormon, that if we keep God’s commandments we will prosper. Throughout the above story there are nuggets of prospering as we moved through the year. I made a new friend, Craig got better, I was able to get pregant again, Craig felt inspired to move when he did, he was able to find a new job right away, and we had a beautiful healthy son that next June.

When my daughter told me she can make herself do things she doesn’t want to do, it made me so glad that we have made that a priority  in our family.  As you lovingly help your children to move out of their comfort zone, by having them work around the house,  get jobs as teenagers, pay for their own expenses, try new things, call people, be responsible for stuff they break or work on big family projects, you are helping them become resilient. You are helping them learn to handle a year like we experienced. You are building layer upon layer of “I love and trust you, so I am not going to do everything for you or give you everything you want. I know you can do it. I love you enough to help you be your strong, confident self.”

Thankfully, not every 12 month period in our marriage has had that many trials in it. We don’t know what is ahead for us and our children, but the stronger we can help them to be, they will start building that emotional structure of, try—succeed, or try-fail-fail, with a lot of support and love from us, as they grow and venture out of the nest, one little hop at a time.  That emotional  structure will start them on the road of, “I can do it” or “I can get through this”, and they will find that their muscle just gets stronger and stronger.

Grit is the gift that just keeps giving.